My Mother's Life Destroyed by Floroquinolones

While recently reviewing my mother’s medical history, due to the ulcers on her leg, I am 100% convinced that floroquinlones have destroyed the past eighteen years of her life. Eighteen years ago my mother suffered from a torn rotator cuff. I thought that it was odd that she had a torn rotator cuff since she did not ever “overuse” her shoulders. She did not golf; play tennis or regularly life heavy objects. She was fit and in great shape. I chalked it up to a fluke. Shortly after she had surgery on her right shoulder, her left rotator cuff tore requiring a second surgery. 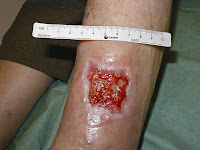 I was very lucky that it only took me one ruptured tendon in my foot and 15 months of rehabilitation from crippling pain to realize that my conditions were due to Cipro, so fortunately I will not suffer her fate. I am so infuriated that it has stolen my mother's life and I shall continue with my crusade to warn others.
Posted by Michele at 11:37 AM