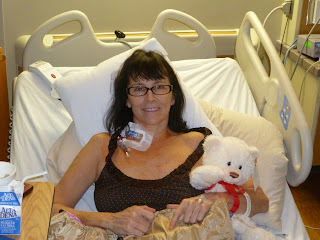 The saga continues: Unfortunately my Cipro/Anemia theory didn’t pan out, although I was on the right track. There was something definitely wrong with my blood. Terribly wrong in fact! I saw my doctor on Tuesday February 8, 2011. We discussed my Cipro side effects and I told him that my muscles, joints and tendons were very much improved, but I was told by my eye doctor that I had blood in my eyes. He agreed that this was a bit of concern, as was the thickening under my left rib cage. He asked how long it had been there and I said that I had kind of noticed it maybe about a month ago. He ordered blood work and a CAT scan and I went home.
I called for a CAT scan appointment in the morning and called his office to inform him that I had an appointment for 2 pm that afternoon. He promptly told me that he was just going to call me and told me to cancel the appointment and to go directly to the hospital as my white blood cells were astronomically elevated and that I had leukemia. The bleeding in my eyes was from the white blood cells blocking the capillaries and the capillaries bursting. They were concerned that I might have a brain bleed. Lovely, huh?
Of course I reminded him who he was talking to just to make sure that he really meant me! I was stunned, not what I expected and not on my list of things to do. I had a bone marrow biopsy to confirm the diagnosis, don’t let anyone tell you that it does not hurt, because it was excruciating!
Leukapheresis and chemo for three days and my blood count went from 372,000 to 98,000. I am a very lucky girl! Now to begin the medication that cost more than $8,000 per month, they tell me that there is help as my insurance won’t pay for it. Ugh! The goal is to get my white count to 10,000 and maintain it.
The type of leukemia that I have is Chronic Myelogenous Leukemia otherwise known as CML. Wish me luck and keep me in your prayers!
Posted by Michele at 2:54 PM 10 comments:

Is it the Cipro?: New dilemma, new theory.

Two weeks ago I went to the optometrist for my overdue eye exam. Prior to seeing him I have been experiencing extreme light sensitivity in the mornings. No light for several hours in my world! I sit in dimly lit rooms and do not open the curtains or blinds. I just chalked this up to yet another Cipro side effect. Along with the light sensitivity I get headaches.
So, as I sit in the Doc's chair, I am pleased to learn that my prescription has only increased by .25 during the past year. Good news for a change......or so I thought. Then the questions began: "Do you have high blood pressure?", " No, last time I checked it was 90/60.". "Are you anemic?", "Not that I know of, why?", "Are you diabetic?", once again, "Not that I know of, why?" Well, you have blood in your eyes, a significant amount." "Great!" Just what I need.
So, I begin to tell him about my Cipro poisoning and burst into tears. Poor guy, didn't know what he was getting into examining me! He of course was shocked and never heard of anyone having side effects from the drug. He claims that they use it all of the time in his profession. Of course, they do, I said. The use is rampant and devastating. He referred me to a retina specialist. I will see him next week.
After leaving the eye doctor, I went directly to the pharmacist and told her my story. Her reply was that it could definitely be caused by the Cipro, as Cipro also effects your vascular system.
After seeing, discussing and pondering over this new revelation with my chiropractor our "theory" and prayer is that I am anemic. In addition to the eye pain and headaches I am bruising incredibly easily. I have noticed that I am short of breath when dancing and I have been chewing ice! All odd symptoms, but all symptoms of anemia. I figure that if I am bleeding inside my eyeballs, that there is a good chance that I am bleeding elsewhere as well. Oh, happy joy! My brain? My Liver? My kidneys? Who knows, I am seeing an internist on Tuesday.
Our thought is that other internal bleeding could be causing anemia. While I am hoping that this is the case, I am terrified that the Cipro is "causing" the bleeding and that they won't be able to stop it.
In addition to the vicious cycle I must add this bit of information. In the beginning the pain in my muscles, joint and tendons was so extreme that I was taking 600 mg of Ibuprofen every 6 hours. I did this for about a month before I tapered it down to 400mg. My intake of ibuprofen has decreased as the months have gone by and my pain is more tolerable, but up until my eye exam I probably still was taking 200 - 400 mg per day. So, when I add this into the mix of a compromised vascular system, maybe internal bleeding is going on. I will keep you posted as my theory unravels. Ibuprofen so helped the pain, so I am often not sleeping nights and just having to white knuckle through it!
Posted by Michele at 9:31 AM 7 comments: