Next Stop; The Dentist 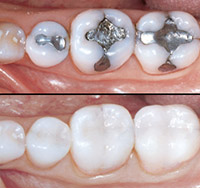 It sure seems as though when it rains, it pours. First I ruptured a tendon in my big right toe; thanks Cipro. One year later, I woke up and could not put my feet on the ground or bend over; thanks again, Cipro. Fifteen months after that incident I was diagnosed with leukemia; can’t blame that on any anything other than just plain old bad luck. Yesterday I broke a tooth; thanks little disguised bone in my burger, as if I don’t already have enough on my plate!

I sort of figured that it was bound to happen sooner or later, I was banking on later, since the same thing happened to another tooth. It seems as though those fillings that I got as a kid, finally weakened my tooth enough to make it precarious. All it took after that was biting on that hidden little bone. Hopefully I will not need a root canal; just a dental crown. A dental crown is sort of like a cap for your tooth. The good thing about a dental crown is that it makes your teeth look all white and pretty, instead of all old and silvery. So except for the cost, I will be really happy to have this tooth match the rest of my mouth! My next stop; the dentist.
Posted by Michele at 8:52 AM